The project has grown from initially monitoring these birds and their breeding territories, to include the implementation of various actions aimed at mitigating the threats to the species, as well as a more intensive monitoring programme which focuses on the breeding success at nest sites and the ranging behaviour of these birds. This is imperative, because the more information we have on these birds of prey, the more likely we are to be able to implement successful systems that will aid the recovery of these protected species.

The Maloti-Drakensberg Vulture Project, through the Bearded Vulture Task Force and the Cape Vulture Task Force of the Endangered Wildlife Trust, has begun to tag these vultures in the region with satellite transmitters in order to effectively gather this information. With these transmitters we are able to monitor movements, determine survival rates and ultimately unearth the reasons behind the high mortality rates.

The project places high priority on community engagement, and believes that educating farming communities and schools on the threats facing the vultures is a pivotal component in ensuring the species survival. Representatives from the programme work tirelessly to increase awareness on the important position that the vulture holds in the areas ecological system.

Ultimately, the Maloti-Drakensberg Vulture Project recognises that the onus is on us, the people of South Africa and Lesotho, to ensure the future of these treasured indigenous vulture species. If we continue on the path which we are currently on with the continual decline of vulture populations, we will see the extinction of these magnificent birds of prey- marking an inexcusable failure for southern African conservation.

The Zululand Vulture Project is a collaboration between the Endangered Wildlife Trust Birds of Prey Working Group, Ezemvelo KZN Wildlife and Wildlife ACT – with support from Eskom, Raptor Rescue and private landowners since 2009.

The overall goal of the project is to provide guidance on the conservation management of vultures in Kwazulu-Natal, according to the Kwazulu-Natal Vulture Conservation Strategy.

In keeping with the context, the project offers to provide guidance and, when feasible, support, to all properties whether state, private or communally-owned in Zululand, on vulture conservation and management issues,and in so doing support the conservation of vultures in Zululand to all stakeholders. Advice and expertise is offered to assist with ensuring long-term conservation security for properties with vultures, as well as providing assistance in drafting management plans for landowners with vultures.

The project also aims to identify new potential sites for vulture research and monitoring, use wing-tagging and tracking to determine long-term survival, dispersal and foraging movements of these birds. This will assist in identifying potential threats and hot-spot areas where birds are particularly exposed to these.

Another aim of the project is to facilitate a coordinated response with, and assistance to, poisoning incidents involving vultures by following the EWT Wildlife Poisoning protocol. Training of conservation officials in vultures conservation issues is facilitated, working towards addressing the threat of the use of vultures for muthi (traditional medicine), and aiming to reduce the impact of all other known threats on vulture populations in Zululand. 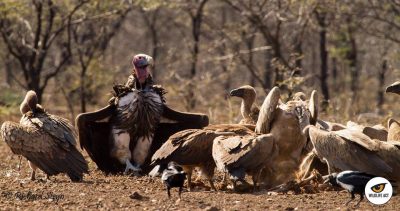